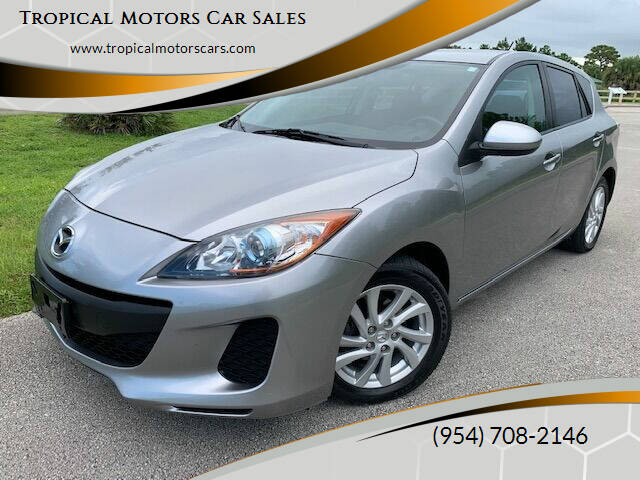 Call for best price and availability!

Vehicle overview The long-running automotive horsepower war might finally be grinding to a halt with a stalemate, at least in the compact car segment. Replacing power output one-upmanship is a new, much greener conflict over fuel economy. Among compacts, 40 mpg is the new target, one that the Mazda 3 has fallen woefully short of in the past. Not anymore. For 2012, the Mazda 3 sedan and hatchback are available with Mazda's new "Skyactiv" powertrain components: a 2.0-liter four-cylinder engine paired to either a new six-speed manual or six-speed automatic transmission. Mazda's engineers essentially went through the internal combustion engine with a fine-toothed comb, looking at the myriad inherent inefficiencies and devising clever solutions to address them. The result is a power plant that can hit that magic 40 mpg without "tricks" like adaptive front grille shutters or transmission programming that shifts the car into top gear at the earliest opportunity. Nor has the rise in fuel economy come at the expense of power. The new Skyactiv engine, which slots between the carryover 2.0-liter and 2.5-liter four-cylinder engines, boasts more power than the Hyundai Elantra and Chevy Cruze Eco -- two cars that also hit the 40 mpg threshold. Only the Ford Focus sports a better combination of power and fuel economy, but it only achieves 40 mpg highway with its Super Fuel Economy package. This new engine complements the 2012 Mazda 3's other existing strengths, including sharp handling, a stylish interior and an available hatchback body style. That said, the 3 isn't quite the no-brainer pick it once was. The Elantra, Cruze and Focus are all excellent choices for a small sedan or hatchback. But for competitive fuel economy and a fun-to-drive nature, the Mazda 3 is hard to beat. 2012 Mazda 3 models The 2012 Mazda 3 is available in four-door sedan and hatchback body styles. Both are available in 3i and 3s trims that are further broken into subtrims. The high-performance Mazdaspeed 3 is reviewed separately. The 3i SV and Sport trims are available only on the sedan. The SV comes sparsely equipped with 16-inch steel wheels, power mirrors, power windows, a height-adjustable driver seat, a tilt-and-telescoping steering wheel, a 60/40 split-folding rear seat and a four-speaker sound system with a CD player, auxiliary audio jack and steering wheel controls. The Sport adds air-conditioning, power locks, keyless entry and an outside temperature display. The rest of the Mazda 3 trims are available on both the sedan and hatchback. The 3i Touring adds to the Sport equipment the Skyactiv-G engine, 16-inch alloy wheels, cruise control, a leather-wrapped steering wheel and shifter, a rear-seat center armrest, a trip computer, Bluetooth (phone and audio streaming) and a six-speaker sound system. The Touring can be had with a package that includes a sunroof and a 10-speaker Bose surround-sound audio system. Those items are standard on the 3i Grand Touring, which also gets heated mirrors, an eight-way power driver seat, heated front seats, leather upholstery, a sliding front center armrest, a color trip computer and a compact navigation system. The 3s Touring adds on a more powerful four-cylinder engine, 17-inch alloy wheels, upgraded brakes, foglamps, LED taillights, a deck lid spoiler (sedan), keyless ignition/entry, sport seats and dual-zone automatic climate control. However, it reverts back to a manual driver seat and cloth upholstery, while the sunroof and navigation system are options. The 3s Grand Touring includes those items. The Tech package available on both 3i and 3s Grand Touring trims adds a blind-spot warning system, adaptive bi-xenon headlights, automatic wipers and satellite radio (optional separately on all trims). An iPod/USB audio interface and a six-CD changer are available as dealer-installed accessories on all Mazda 3 trim levels. 2012 Highlights For the 2012 Mazda 3, a newly optional 2.0-liter engine debuts and it delivers bo

Apply for an Auto Loan

Enter your phone number or email address to receive this VIN

Success! Your message has been sent.

Uh oh! There was an error sending your message. Please try again in a few moments.