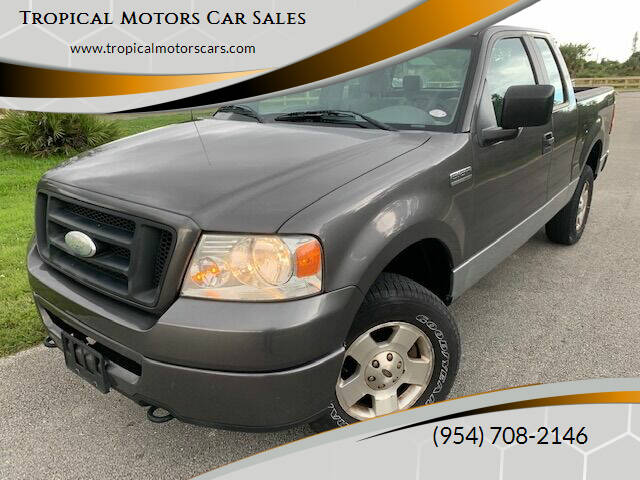 Call for best price and availability!

If you want to know what the best-selling vehicle in the U.S. is, look no further than Ford's F-Series, which closes in on the million-unit mark every year. Although this line of full-size pickups includes the larger Super Duty trucks and even commercial-use chassis cabs, most consumers end up with the entry-level F-Series truck, the half-ton Ford F-150. Last redesigned for 2004, the F-150 has been tailored for today's pickup buyer who's as likely to use his truck for daily commutes and family errands as he is for serious towing and hauling tasks. Drive it around with an empty bed and the 2007 Ford F-150 delivers a smooth ride, nimble handling and a quiet cab. In crew cab (SuperCrew) form, that cab can comfortably accommodate five or six people. Carrying passengers in the backseat is still a viable option if you get an extended cab (known as a SuperCab), and even regular cabs offer reverse-opening access doors for easy access to the storage area behind the seats. Interior ergonomics are excellent, and a wide selection of option packages allows buyers to personalize the look of the cabin. If there's a downside to the Ford F-150, it's the truck's lackluster engine offerings. Although the top-line 5.4-liter Triton V8 stacks up to competing V8s on paper with 300 horsepower, 365 pound-feet of torque and an impressive 10,500-pound tow rating, our editors have been disappointed by its real-world performance. Whether unladen or towing a trailer, the F-150 feels noticeably slower than peers like the Nissan Titan, Dodge Ram and GM's Silverado/Sierra twins, and our testing numbers have backed that up. Curb weight is the main culprit, as the F-150 significantly outweighs every one of its competitors. Another issue is that Ford's pickup truck still uses a four-speed automatic transmission, while most other automakers have switched to five-speed automatics for improved acceleration and fuel economy. This doesn't mean you won't be satisfied with a 2007 Ford F-150 purchase. For buyers who don't require the quickest full-size truck out there, the F-150 compensates with its civility: This is by far the easiest of the half-ton pickups to drive on an everyday basis, and with the wide range of body styles and equipment, you're sure to find one that meets your needs. 2007 Ford F-150 models A full-size pickup truck, the 2007 Ford F-150 is available in regular cab, extended cab (known as SuperCab) and crew cab (known as SuperCrew) body styles. Regular cabs come with a 6.5-foot- or 8-foot cargo bed, while SuperCabs can have either of those or a garage-friendly 5.5-footer. The F-150 SuperCrew takes either the 5.5-foot or 6.5-foot bed. Regular and SuperCabs come with reverse-opening rear doors for easier cab access, while SuperCrews have four full-size doors. In addition, there are five different trim levels to consider (XL, STX, XLT, FX4 and Lariat), along with three major packages (FX2, King Ranch and Harley-Davidson). Meant primarily for commercial use, the lightly equipped base XL comes with 17-inch steel wheels, vinyl seating, AM/FM radio and not much else. The STX is similarly equipped but adds body-colored bumpers, sportier wheels and a few additional features, such as a cloth bench seat, air-conditioning and an upgraded sound system with a CD player and an MP3 player input jack. The volume leader in the lineup is the midgrade XLT, as it offers the widest array of available options, as well as chrome exterior trim, an upgraded cloth interior, cruise control and power windows, mirrors and locks. The FX4 is geared toward off-road enthusiasts as it includes underbody skid plates, retuned springs and heavy-duty shocks, as well as 18-inch alloy wheels and a leather-wrapped steering wheel. High-line F-150 Lariat models cater to buyers looking for an upscale ambiance with interior features like brushed aluminum and wood highlights, leather upholstery, a power driver seat, automatic climate control and a trip computer. An option package for two-wh

Apply for an Auto Loan

Enter your phone number or email address to receive this VIN

Success! Your message has been sent.

Uh oh! There was an error sending your message. Please try again in a few moments.